Fashion and cycling blogger Vélo-à-Porter is guest posting for CycleStyle in the coming months. The goal of Vélo-à-Porter is to inspire and encourage more women to bicycle as lifestyle, not just as sport. In this post, she shares her experience of doing a school pick up with her cargo bike!

As per usual, I left the city at 4:15pm to make dinner for the family. I park my e-bike in the garage, check that the Nihola’s battery is fully charged and go up in the lift to our apartment. 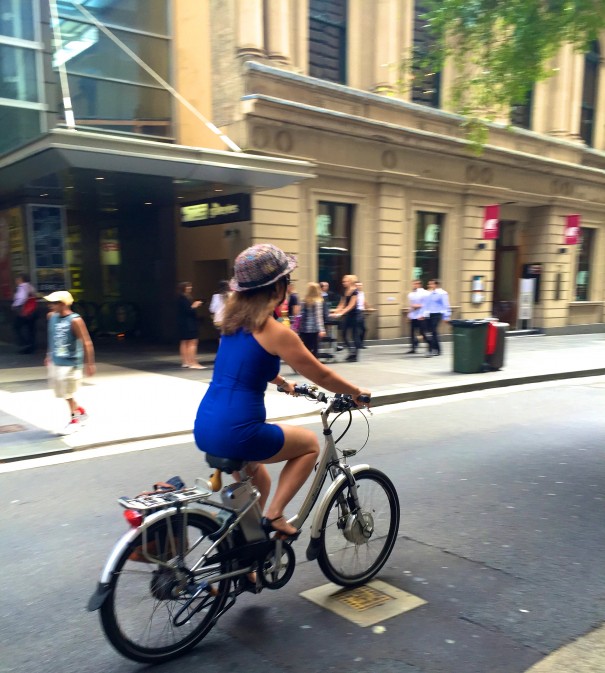 After making dinner, I left home to pick up Ofelia from after school care about 5:15pm. There was a sudden downpour at 5pm when I took the the roast potatoes out of the oven. I delayed my departure for a few minutes as these sudden downpours tend to finish as quickly as they have begun. By 5:10pm, it was nearly clear.

I went to the garage and unlocked the Nihola and rolled out of the garage. The fastest path to school is up Reservoir Street. It is a very hilly street. At the top is one of the main water reservoirs for Sydney. The reservoir is known as the Crown Street Reservoir and is the oldest water supply reservoir still in use in Australia.  It has been in continuous operation since 1859.* (Source: Wikipedia) The eZee conversion makes it possible to go up the hill at a reasonable pace and with not too much effort. The owner of Bang Bang, a cafe, always waves hello as we go past. 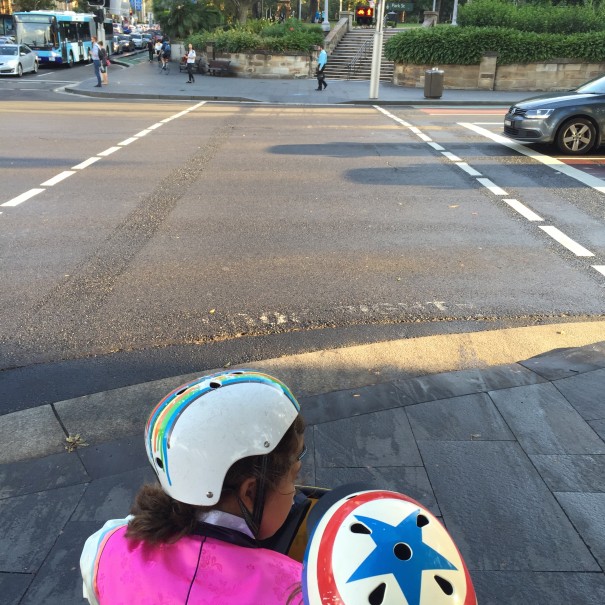 I collected Ofelia with her school bag and violin and she was a little upset because someone had torn the straps off of her hanbok, a Korean traditional dress.  She had removed the jacket because the day had become warm. Earlier that morning, I suggested that she wear a blouse underneath that morning as it was going to be warm this autumn day. I told her I would sew them back on for her and she was relieved.  I said that those were the risks of wearing such a beautiful dress to school for Harmony Day. She agreed.  We talked about her day as she put on her helmet and seated herself in the cabin of the Nihola. I put my sunglasses on.

We rolled to the traffic lights on Crown Street, in front of school and we waited for the red light to change. A twin cab ute passed by filled with four burly dark-haired men.  They slowed down as they passed us to wave. I smiled. A few minutes later a car passed and a kissing sound emanated from the window. The light changed and we went to pick up Julius from childcare. The ride is mostly downhill. We ran into a cycling friend and I gave him a card for my blog veloaporter.com. He was full of congratulations and had a few suggestions for me. We picked up Julius at 5:40pm and were on our way home when he suddenly remembered that he was thirsty. He wailed all the way home. Of course, when we arrived home and I put the cup of water in front of him, he didn’t want it.

I told my husband Justin about the waving men and the kissing sound from the car. He said, “What do you expect? You and Ofelia are both so attractive.” My lovely husband.

We stumbled across this fabulous Italian online store called My Old Bicycle/Spernicelli Biciclette. All the…

Next Wednesday 13 October is National Ride to Work Day, a great event with communities…

Charge your gadgets by bike