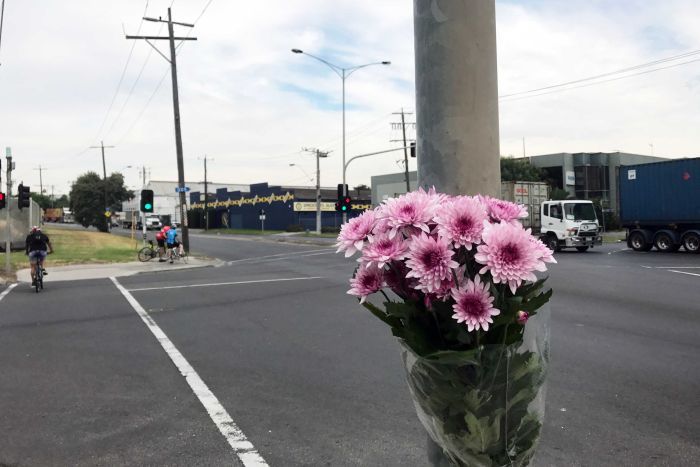 As promised in my previous post, here is my email regarding the death of a female cyclist at the corner of Whitehall St and Somerville Road Yarraville yesterday after being struck by a truck.

I sent a variation of this email to every City of Maribyrnong councillor (info here http://www.maribyrnong.vic.gov.au/Page/Page.aspx?Page_Id=8484), Wade Noonan, the local State Member [email protected] and Luke Donellan, Minister for Roads and Road Safety [email protected], with relevant amendments for each recipient.

Because these are my personal feelings on this issue please don’t just copy-paste the whole text. But feel free to use it as a basis for a template for your own correspondence.

Let’s make some noise and make sure our voices are heard, for the safety of everyone on our streets.

I refer to the news today that a female cyclist in her 30s died yesterday after being hit by a truck at the intersection of Whitehall Street and Somerville Road, Yarraville.

I feel compelled to write to you because that woman could easily have been me, or my children. I’m a City of Maribyrnong resident and I am a female cyclist in my 30s who cycles regularly as a mode of transport, often with my two children aged 4 and 6 years old.

Whitehall Street has an off-street bike lane but at the intersection of Somerville Road cyclists are forced to share the road with a busy truck route with a desultory ‘bike lane’ marked by a white line. There is no physical barrier, no sharrows, no bollards, bike advance traffic signals or even green road paint.

While the relevant locations are owned and managed by VicRoads, they are located within the City of Maribyrnong.

As such I am seeking your assistance to advocate for:

I know as a local councillor you can apply political pressure on the State Government and VicRoads to engineer a safe solution to cyclists being forced to mix with cars and trucks at the relevant locations.

Firstly, the current design requirements for Western Distributor state there will be a new fully separated walking and cycling connection from the Somerville Road/Whitehall St intersection to the Maribyrnong River.

However, once a cyclist moves inland from the intersection there will be no separated bike infrastructure.

If we are to prevent further deaths at this cycling black spot then the design requirements for Western Distributor need to be amended to specifically require that there is separated bike infrastructure at the relevant locations.

Secondly, as Western Distributor will take years to complete I am also asking that you apply political pressure on the State Government and VicRoads now to engineer an interim solution that can be quickly applied to enhance the safety of the relevant locations.

Funding of cycling infrastructure in the City of Maribyrnong

The Maribyrnong Bicycle Strategy 2014-2019 indicates that Council recognises the benefits of environmental, mobility, health and social equity benefits of investment in infrastructure and programs supporting cycling.

A 2011 study by the Cycling Promotion Fund and the National Heart Foundation describes the top four reasons why Australians (who would like to) do not cycle for transport:

The percentages are further increased when the question is asked of women.

Investing in safe cycling infrastructure directly alleviates the four main reasons why Australians do not cycle and it is an economically efficient transport solution for Maribyrnong’s predicted population growth.

The 16/17 Council budget shows proposed expenditure of $350,000 on bicycle network upgrades on the river trail, which equates to only $4.18 per capita.

If the Council is truly committed to increasing cycling as a mode of transport then it needs to increase its expenditure on cycling to be at least commensurate with other Melbourne inner city municipalities (2016 data):

Finally you would know that Maribyrnong has a cycling gender gap (only 26% of cyclists in Maribyrnong are women) and in general women are more sensitive to the absence of dedicated bike lanes. Women are an indicator species for cycling – when a route reaches parity between genders then the route is safe for cyclists generally. Thus the measures that promote cycling as a safe mode of transport for women should be a priority when considering the allocation of cycling funding.

I am hoping that there will be a coordinated response to this tragedy so I will be sending similar correspondence to the other City of Maribyrnong councillors, Wade Noonan, State Member for Williamstown and Luke Donellan, the Minister for Roads and Road Safety.

I look forward to receiving your response.

Oooh saucy! This nautical-inspired pin-up girl is showing a bit of sass and a lot…

What Alison Lucien wore on her Citibike New York City

Alison Lucien is the owner of Eleanor's, a bike shop with fashionable cycling accessories for…