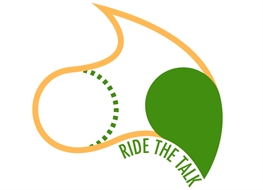 Why are you an urban cyclist? For convenience? Health reasons? Because it’s cheap? Or for environmental reasons?

Melburnian John Knox, aged 54, has been a cycle commuter for over 30 years (and even met his wife through the Melbourne Bicycle Touring Club – cute!). He cycles for a variety of reasons but now he has decided to do something about climate change – by embarking solo on a cycling trip around Australia to give talks in local communities and share the message about what people can do to help play a part in the issue.

Why? Because he wants to help create a world in which his two kids can live a safe, low-carbon lifestyle, benefitting his family and others in the community.

Basically the message for ‘Ride the Talk‘ is that there are lots of simple, low-cost things that people can do in their everyday lives that save energy, reduce greenhouse gas emissions and avoid them wasting money. These are things they can do now and will have little to no impact upon the quality of their lifestyles.

The trip is expected to take about 5 months on the road once he leaves Melbourne at the end of July. He will be going in an anti-clockwise direction to take advantage of prevailing winds (something that all cyclists know only too well!)

I found out about Ride the Talk through PlanBig, a free website where you can post your own plan, big or small, and invite others to get involved (it’s an initiative of Bendigo and Adelaide Bank, but not for profit). The site describes it as bringing ‘like-minded people coming together to give each other the support they need to make their dreams reality’.

I’ve been following John’s progress on PlanBig for a while and he’s finally launching his first talks tomorrow at the City of Darebin! Then City of Maroondah on Wednesday, Whittlesea City Council on Thursday and Shire of Yarra Ranges on Friday.

You can read all about John’s plan here and check out his website here. It’s so impressive to see someone taking positive action on such an important issue. Bon voyage John!