I was at the Ausbike Bike Expo over the weekend, hunting around for great cycling gear for the store, meeting suppliers and with a mission to see whether I could find a Pram Bike.

Yes, that’s right. Since my first post about saving up for a pram bike, I’m actually in the situation where I will be needing a pram bike in the near future! Not only for a baby, but because my own bike has handlebars which are at an in-between angle of a situp bike and a road bike, which means as my tummy gets bigger I will probably need to switch to a more upright bike if I want to keep cycling through my pregnancy. 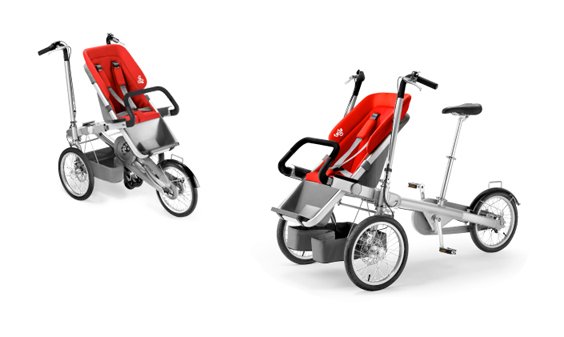 At Ausbike I was quite excited to discover Taga, a stroller/bike made in the Netherlands. It looks quite similar to the Zigo except that it doesn’t convert into a stand-alone bike. But with both of them I like how the baby seat/carriage sits right under the handlebars. I’ve pretty much ruled out any form of trailer because I’d like to be able to see the child in front of me.

On blog readers’ recommendations I also test rode the Gazelle Cabby and to be honest I felt quite uncomfortable and unsteady with its length given it’s on two wheels. I know that many people really love the Gazelle Cabby but it wasn’t for me –  I felt like I was steering a ship compared with the Taga which felt like a neat little wheelbarrow.

I had a go at converting the Taga from a bike to a stroller and it was relatively easy with lots of quick release mechanisms much like a folding bike (which I used to own so I’m familiar with the process). The video shows that it should only take 20 seconds, but I think a bit of practice is needed.

I also liked that Taga is narrow enough to fit through a standard doorway and has a handbrake so you can manoeuvre all the parts (and your baby) without having to chock it from rolling away. With a couple of twists and turns it can fit into a sedan, but obviously not as easily as a standard pram – I don’t think I’ll be trying to manage the Taga, the baby, groceries and baby gear without a hand. But that’s ok, as I intend to cycle as much as possible!

As you’d expect, the Taga doesn’t come cheap. The standard model (with the child seat) is $2295. I’d like to think that it still presents value for money as I will get a lot of use out of it and I can save money by minimising the amount of time I have to rely on a car or public transport to get around. Plus I actually feel safer cycling than I do driving these days! 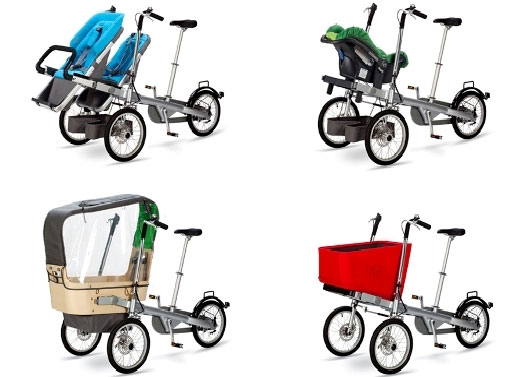 As for the accessories, they are really cute and functional. The ones that caught my eye were:

Brangelina. The barometers of cool.

Projector Bike is a custom-designed three wheeled cargo bike with a high-powered projector and stereo system. This…

How cute is this? ''Spread your love' by Hamed Hohan is a tyre design stamping…