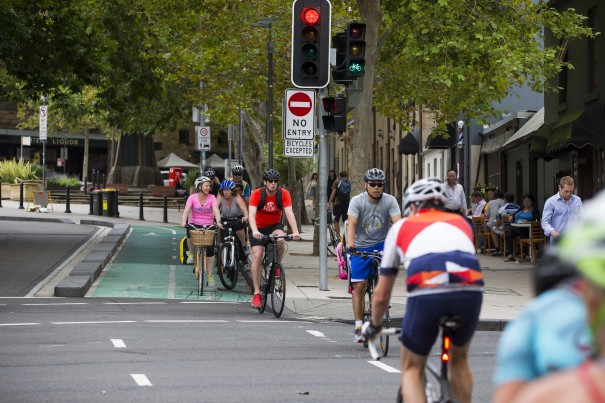 Lucky Sydney cyclists! Ten major bike connections are under construction or in design to support the growing number of people riding and ease pressure on the city’s roads and public transport network.

City of Sydney-funded cycleway links along sections of Castlereagh and Liverpool streets are expected to be complete this year, construction is underway on another four projects, and design work is being undertaken on five more.

“Bike trips have more than doubled over the last four years in our local area, and where there are cycleways, they’ve doubled again,” the Lord Mayor said. “On Bourke Street alone there are now five times as many riders. Transport for NSW surveys confirm many more people would commute by bike if it was safer and more convenient.”

Bike paths under construction include the Broadway link through Chippendale, an upgraded shared path connecting the Bourke Street and Bourke Road cycleways and safer cycling links to the Sydney Harbour Bridge, making the north-south commute a smoother ride.

Design work is underway on connections to the Castlereagh Street cycleway, a new cycleway along Lawson Street in Redfern, and cycleways for Green Square Town Centre. The City has also received NSW Government funding to help design a major cycleway link along Moore Park Road.

Plus, a new children’s bike track at Sydney Park is also supporting the growing number of children learning to ride.

How to Fit Your Helmet Correctly   Step 1: MeasurementPlace a tape measure slightly above…

CycleStyle Photoshoot AW12 – Behind the scenes at Melbourne Museum

Getting ready to ride to work…Johnston St, Fitzroy

I snapped Kate just was she was getting ready to ride to work. I liked…